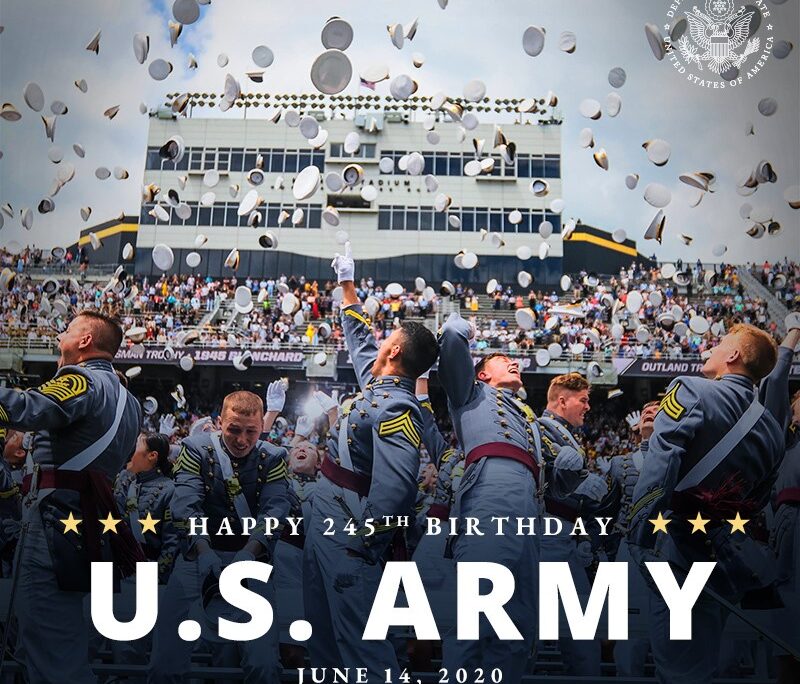 On this day in 1775, the Second Continental Congress established the Continental Army to fight for our Nation’s independence. In the 245 years since, the United States Army has helped defend our freedom all over the world and has made countless contributions to our Nation’s security and the American way of life. Today, we recognize the United States Army for its many achievements and pay tribute to all those who have served in America’s oldest military branch.

This year marks the 75th anniversary of the conclusion of World War II—a monumental struggle between the forces of freedom and tyranny. In both the European and Pacific Theaters, the United States Army was critical to the success of the Allied Forces. The historic triumph came at a somber price, as the Army bore the brunt of the fighting—and human cost—of our Nation’s contribution to victory in the war. As we celebrate the United States Army’s incredible accomplishments, we also pause to remember those Soldiers who laid down their lives to defend our freedom and protect their fellow Americans.

As our Nation continues to face the threat of the coronavirus pandemic, we acknowledge the important role the Army has played in the all-of-America response effort. The United States Army, Army National Guard, and Army Reserve Soldiers helped mount a nationwide response to this crisis that truly embodies their motto of “This We’ll Defend.” In New York, the United States Army Corps of Engineers created and converted alternate care facilities, providing extra space for thousands of patients. In Washington State, Army healthcare professionals deployed to provide medical support against the emergent virus. And, in Maryland, researchers with the United States Army Medical Research and Development Command have worked tirelessly to develop coronavirus countermeasures. From coast to coast, the incredible support of our Soldiers reminds us that no fighting force rivals that of the United States of America.

This year, we celebrate our brave Soldiers—active, guard, and reserve, past and present—who are willing to put themselves in harm’s way and make the ultimate sacrifice for our country during times of both war and peace. As Commander in Chief, I join a grateful Nation in wishing the United States Army a happy 245th birthday.