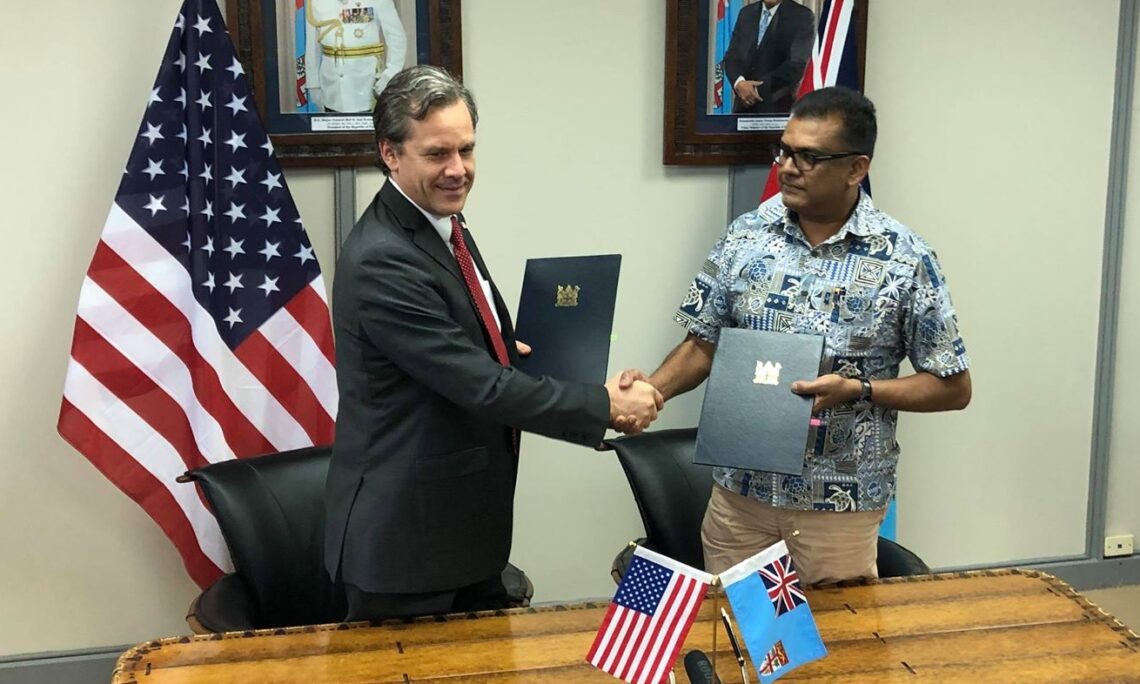 Ambassador Joseph Cella and Fiji’s Permanent Secretary for the Ministry of Foreign Affairs Yogesh Karan signed the Defense Cooperation Agreement which allows the United States to provide defense and security funding and training opportunities for our Fijian counterparts.  The agreement will be utilized immediately with a US$1.75 million package of training and equipment supporting Fiji’s peacekeeping forces and US$4 million to provide inshore patrol boats and associated training to the Fiji Navy.

Ambassador Cella said, “It was an honor signing the Defense Cooperation Agreement between the United States of America and the Republic of Fiji with Mr. Karan.  This was the first formal signing of such an agreement between the U.S. and Fiji since 1986 and reflects our shared bedrock principles in our respective founding documents of our nations.”

“The agreement is also indicative of our joint commitment of remaining vigilant in defending the peace, freedom, and stability in the Pacific which we have been blessed with for 75 years, secured together through side by side sacrifices in World War II. This is a uniquely auspicious occasion in that it occurs during the 50th anniversary of Fiji’s independence which we are looking forward to celebrating with all of the citizens of Fiji in the coming weeks,” Ambassador Cella added.

This signing furthers a security assistance agreement for the provision of certain defense articles, related training, and other defense services on a grant basis.  This agreement, which allows for enhanced exchanges and defense cooperation programs, demonstrates the strong ties between the United States and Fiji.

The U.S. Department of State is responsible for ensuring that there is an agreement with each partner nation eligible for defense program assistance through the U.S. Department of Defense, including funding of Peacekeeping Operations (PKO) programs, Global Peace Operations Initiative (GPOI) programs, International Military Education Training Agreement (IMET), among others.