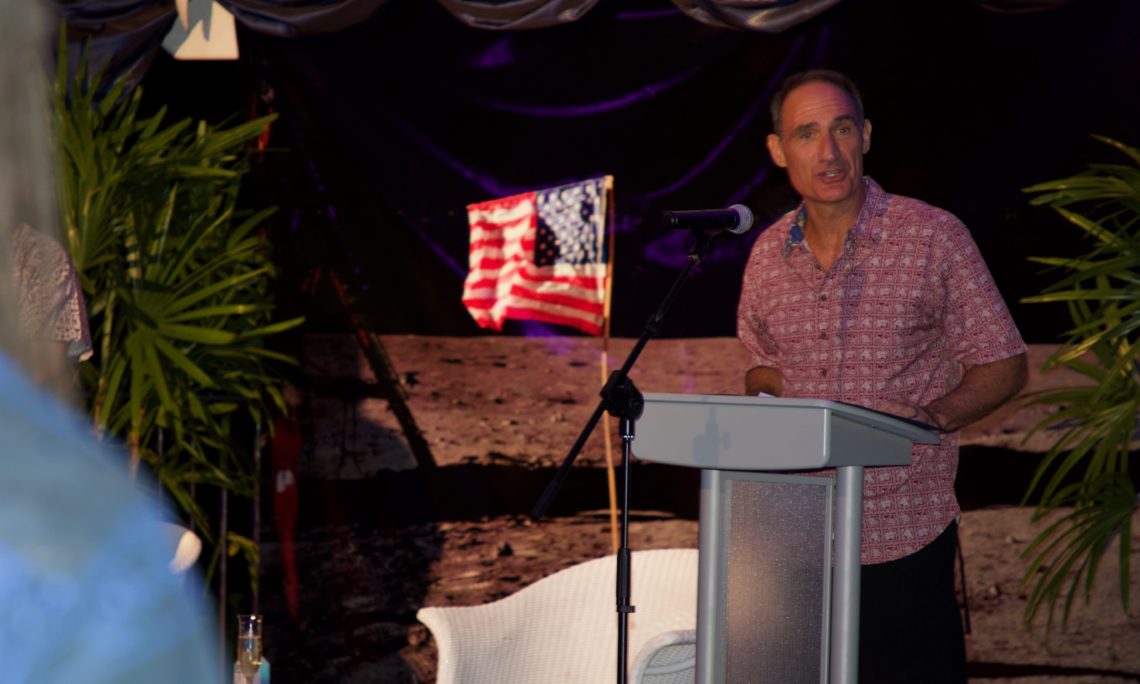 Ni Sabula Vinaka, Namaste, and a very good evening. Thank you for joining us this evening to celebrate the United States’ 243rd Independence Day!
I’d like to acknowledge warmly our Chief Guest, the Honorable Minister for Foreign Affairs, Defense, and National Security Inia Seruiratu. I’d also like to welcome the Honorable Acting Chief Justice Kamal Kumar Honorable Ministers, Permanent Secretaries, and Members of Parliament, Heads of Diplomatic Missions, Members of the Diplomatic Corps, Heads of International and Regional Organizations, Distinguished Guests, Ladies and Gentlemen. You are all friends.  And you are all warmly welcome.

There is no secret with the decorations: We have a theme for this evening’s party!  Tonight, we are celebrating the 50th Anniversary, this month, of the Apollo 11 moon landing.  An impressive feat that brought the world together in amazement. This was a proud moment for our country, fulfilling a vision laid forth in 1961 by President John F. Kennedy.  Who famously committed the United States to putting a man on the moon and bringing him back safely.  He said, “We are going to the Moon not because it is easy, but because is hard.” And it was hard.  And it was worth it.  8 years later – 50 years ago – that inspiring vision was fulfilled, when Neil Armstrong set foot on the lunar surface.  I was exactly nine months old at the time — so I can’t pretend to remember it exactly.  But there are quite a few among us tonight who do.  Including my parents, Margaret and Martin.  If you can’t guess, they’re the ones smiling and blushing in the front row.  As my parents – and as many among us tonight – can attest, the moon landing was not simply a U.S. achievement.  Rather, it was a testament to the human spirit more broadly, more universally.  It was something we can all celebrate.  As Neil Armstrong famously said, as he took his first steps on the moon: “This is a small step for man, but a giant leap for mankind.”

We seem to be full of 50ths!  Last year we celebrated an equally impressive milestone: the 50th anniversary of the Peace Corps in Fiji.  And we had a great party!  Peace Corps continues to do excellent work throughout Fiji as it enters its second half-century.  And next year, Fiji will celebrate the 50th anniversary of its independence, which will be another occasion for celebration!  Not coincidentally, next year will also mark the 50thanniversary of diplomatic relations between the United States and Fiji.  Truly, the United States has been with Fiji from the beginning.

But as we celebrate the past, we’re also happy to be in the present.  And this year marks some significant achievements.   Together we welcomed two four-star admirals and five U.S. Senators, the first congressional delegation of its kind in seven years.  And I am enormously grateful to Minister Seruiratu for the warm Fijian welcome he gave our visitors.  This year, we welcomed multiple senior officials from the departments of State, Defense, Interior, and Treasury.  And tonight, we’re honored to have a distinguished guest from the U.S. Agency for International Development, USAID’s top official covering Asia and the Pacific – Anne-Marie Yastishock

As in previous years, we sent dozens of people on academic and professional exchanges to the U.S. and we are looking forward to sending even more in the coming year.  I was honored just last week to host a dinner for several dozen of our exchange alumni.  Many of whom are here tonight.  All of whom are very impressive.  And there was something new and exciting!  Just last month, I was proud to congratulate Max Delai and Sera Lava-ravu on their admission to the West Point Military academy.  You’ve probably seen their smiling faces in the papers.  They really are something special.  Originally, we were told that we had one spot reserved for Fiji.  But after looking over Fiji’s outstanding slate of candidates, West Point’s admission board selected two cadets — a testament not just to the quality of the applicants but to the strength of the U.S.-Fiji relationship.  Max and Sera are already in the United States.  But let’s stop and give them a hand anyway.  I look forward to a similar announcement soon about the Naval Academy at Annapolis.

We were equally pleased this year to sign landmark agreements with Fiji.  Our new Shiprider agreement enables Fiji military and law-enforcement personnel to ride on U.S. coast guard and naval vessels.  Together, we hold joint patrols to enforce Fiji’s rights in its Exclusive Economic Zone.  We’ve already had several successful joint patrols, including the visit last week of a ship to Lautoka.  Fiji also signed a State Partnership with the Nevada National Guard, and they are already planning a range of joint efforts on humanitarian rescue and disaster relief, among other exciting endeavors.  And we were particularly pleased to sign an agreement to help Fiji’s police stand up a dedicated police unit for international peacekeeping operations.

We were also honored to participate in some major events for which Fiji deserves congratulations: I should first mention – enthusiastically – Fiji’s triumph in the World Rugby 7s Tournament.  If the United States had to place second, we’re happy first place went to Fiji.  All I can say now is, “see you at the Olympics!”  Last November’s elections were an equally proud moment for Fiji.  And we, as an Embassy, were just as proud to have contributed nearly three dozen personnel to the multilateral observer mission, headed up by our good friends from Australia and Indonesia.  A third signal event was the Asian Development Bank meetings in Nadi.  We weren’t alone in being tremendously impressed.

Together with Japan, we’re the largest donor to the ADB.  And we’re the largest donor to the World Bank.  And we’re enormously pleased with the work they continue to do in Fiji and the region. On that note, we were particularly happy to have worked – with our partners – to secure access for Fiji to additional World Bank financing under its International Development Association mechanism, which sounds arcane but is a big deal.  IDA will give Fiji a lot more flexibility in how it finances its development, and we’re happy to have helped push it through.  I’ve mentioned our special guest from USAID.  And USAID has continued to do great work – among other things – in helping our partner countries and institutions gain access to international climate financing.  That’s just the beginning.  Ms. Yastishock is here as part of a larger effort to broaden and reinvigorate USAID’s engagement in Fiji and the region.  On that score, I promise there will be more exciting news to come!

In keeping with our theme, let me close by citing the inscription on the plaque that Neil Armstrong and Buzz Aldrin left behind on the surface of the Moon in July 1969.  (Buzz, by the way is standing behind me.). That inscription said, simply “We Came in Peace for All Mankind.”  And I think that says it all.

Before I offer up a toast, I’d like to thank the Hard Rock Café for the outstanding catering.  The Nem and Falei Band for the great music.  And Prashant for the special effects.  I’d like to thank our sponsors for their generosity.  And above all, I’d like to thank the Embassy community – staff and family members – who worked hard to make this evening happen.  While you get your glasses ready, I’ll draw your attention to a very short NASA video.  It is just two minutes – so bear with me – it worth seeing!  And then we’ll have a drink.  VIDEO

In that spirit of optimism, ambition, generosity, and friendship, I would like to offer a toast to the government of Fiji: let us continue to work together for the peace and prosperity of our beloved nations, the region, and the world.  Thank you for your leadership, support, and friendship.