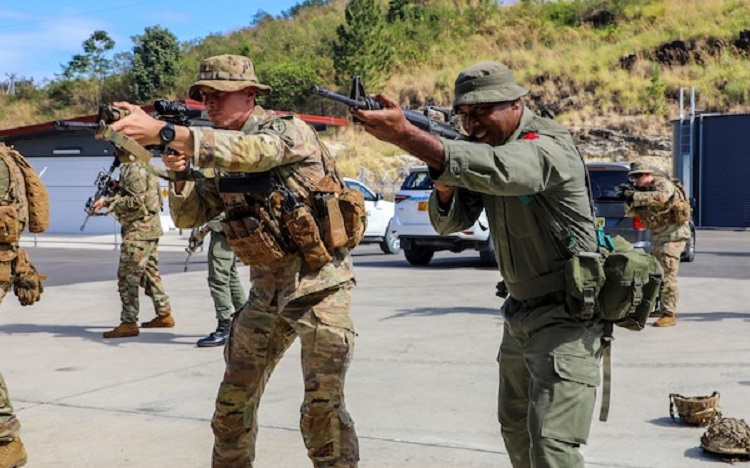 Exercise Cartwheel is a multilateral military-to-military training exercise with the Republic of Fiji Military, Australian, New Zealand, and British forces that builds expeditionary readiness and interoperability by increasing the capacity to face a crisis and contingencies by developing and stressing units at the highest training levels.

“The name of this exercise originates in Operation Cartwheel, a major military operation for the Allies in the Pacific during World War II,” said Lange. “In Operation Cartwheel, forces from the U.S., New Zealand, Australia, and Fiji joined by other Pacific Island nations, fought side by side to neutralize the Japanese base at Rabaul, Papua New Guinea.”

“The excellent combat spirit, discipline, soldierly bearing, and sportsmanship of every member of the 3rd Battalion has earned for Fijians the highest esteem among the American Forces,” said Griswold. “It is my sincere hope that the fortunes of war will again place your battalion under my command.”

Following the ceremony’s opening remarks, attendees moved to an open-air pavilion for the culturally rich portion of the morning’s event. Members of all forces shared a traditional drink called Kava, prepared ceremoniously to symbolize the coming together as one family, united in the goal of working toward a free and open Indo-Pacific region.

Later, members of the New Zealand army, led by Warrant Officer Class One Chad Dewes, assigned to the 1st New Zealand Brigade, gave thanks through song, and summed up the opening ceremony.

“We are here to build relationships and to work hard in beautiful Fiji,” said Dewes.