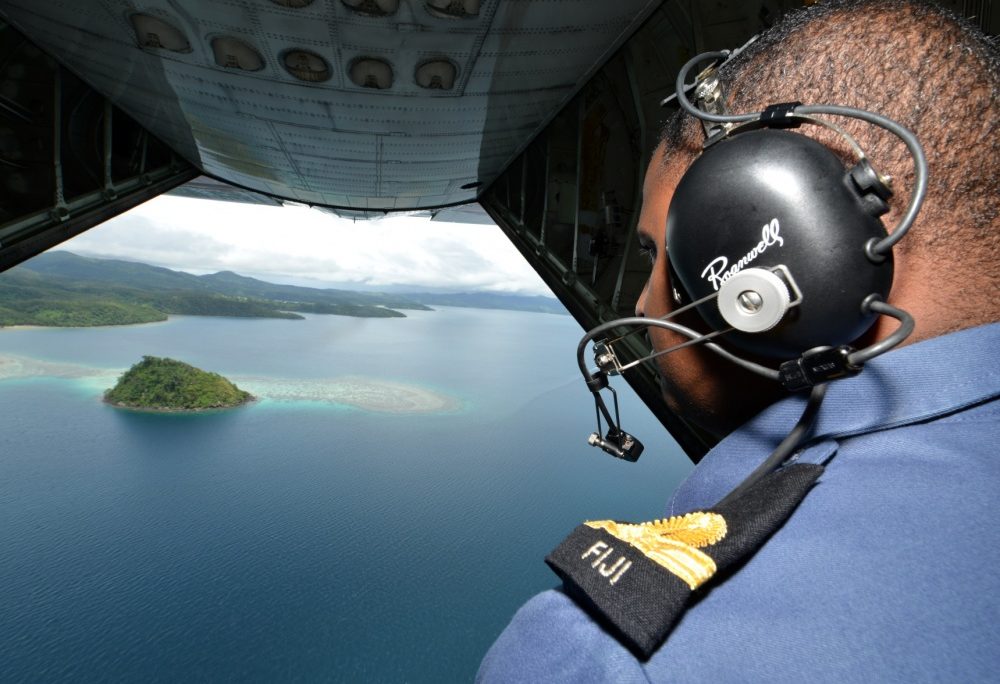 “What we were tasked to do is to make sure we can conduct interoperable missions with our Fijian partners,” said Coast Guard Cmdr. Edward Ahlstrand, the pilot of the Hercules. “We took aboard a Fijian officer, who is a shiprider, to conduct law enforcement here in the Fijian EEZ [exclusive economic zone]. We met up and provided overhead cover for one of their enforcement patrol boats, established communications with them and were able to show we can work together.”

Earlier in the week, Fijian navy Sub-Lt. Opeti Enesi, a navigation officer, was welcomed aboard the Coast Guard Cutter Munro (WMSL 755) as the first Fijian shiprider to board a Coast Guard asset. Enesi was also the shiprider on the Hercules.

The bilateral shiprider agreement, signed Nov. 12 by Michael Goldman, Charge d’Affaires of the U.S. Embassy in Suva and Fiji’s Minister of Defense Ratu Inoke Kubuabola, allows Fijian officials to board United States’ assets and conduct law enforcement from them in Fiji’s territorial waters. The agreement allows both nations to pursue common causes such as fisheries protection.

Fisheries are an important renewable source of food and income to many Pacific nations and it is in both Fiji and the United State’s interests to protect those resources from illegal, unreported and unregulated fishing. The agreement allows both nations to cooperate toward common goals and regional stability.

“I think the air ride today in the C-130 was really awesome.” said Enesi. “I had a good experience. Just asking the crew about the asset itself, its low cost as they mentioned, there’s a lot of endurance and it can travel a great distance. It’s really helpful in terms of search and rescue. It’s easy to call the C-130 before deploying our patrol boats.”

While the Hercules was on patrol some of the Munro’s crew were at the Lami Town beach park participating in a beach clean up project. They cleaned up the beach and got to know the community.

“It was awesome getting to talk to the people,” said Petty Officer 3rd Class Carli Carnes, an electrician’s mate on the Munro. “I love interacting with the community here. It was a blast.”

Their fellow shipmates on the Munro gave tours to the public and media. The Munro is one of the Coast Guard’s new National Security Cutters and it is the first time one has been in this region of the Pacific. This is the Munro’s first operational patrol.

Prior to arriving in Fiji the Munro visited the Solomon Islands and held a rededication ceremony at a memorial to their cutter’s namesake, Signalman 1st Class Douglas Munro. Munro gave his life during the Battle of Guadalcanal and is the Coast Guard’s only Medal of Honor recipient.