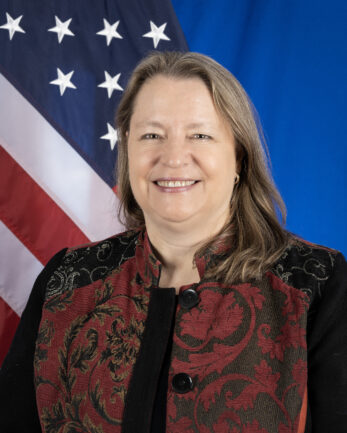 Marie Damour is a career member of the Senior Foreign Service, class of Minister-Counselor.  She is the Ambassador to the Republic of Fiji, Kiribati, Tonga and Ambassador-designee to Nauru as well as Tuvalu.  Previously, Ms. Damour was Consul General of the U.S. Consulate General in Ho Chi Minh City, Vietnam; the Director of the Office of Maritime Southeast Asian Affairs in the State Department’s Bureau of East Asia and Pacific Affairs; Director of the Office of Policy Coordination and Public Affairs in the State Department’s Bureau of Consular Affairs; and the Deputy Chief of Mission, as well as Chargé d’Affaires, a.i, at the U.S. Embassy in Wellington, New Zealand.  With almost three decades of service, Ms. Damour has worked in five different regions of the world and served successfully in a variety of leadership and policy-making roles.

Ms. Damour earned her B.A. from the College of William and Mary.  She speaks French, Vietnamese and Portuguese and is the recipient of multiple State Department performance awards as well as the Peacemaker Medal from the Government of Brazil.