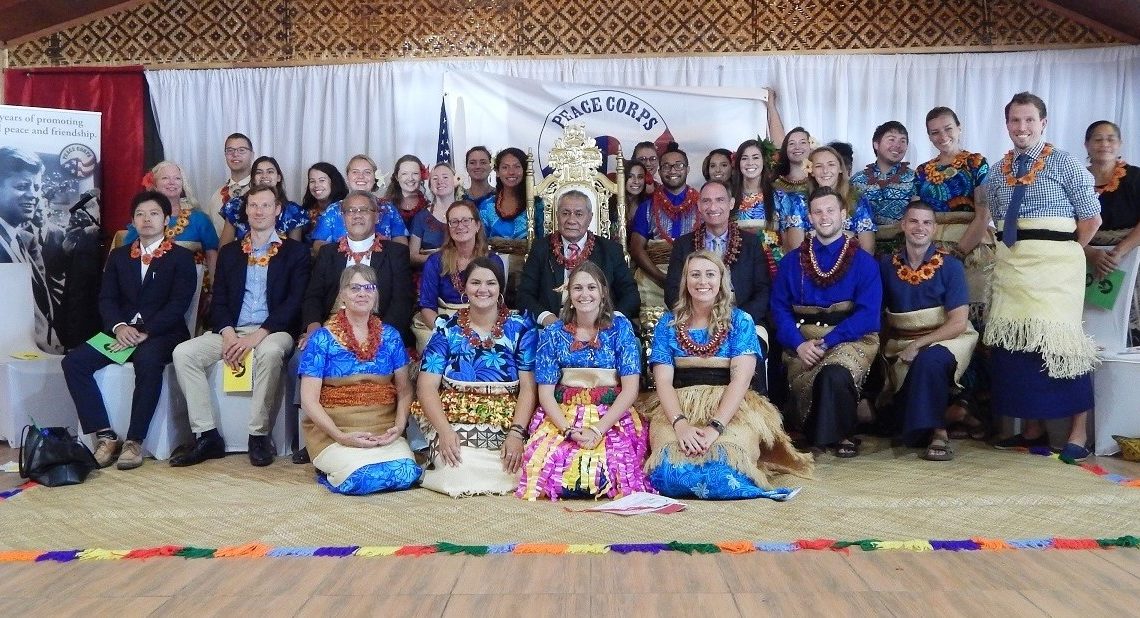 On Tuesday, November 6, at Vakaloa Beach Resort in Kanokupolu at 10:00 AM, 25 Peace Corps Trainees from Group 83 will be inducted as Peace Corps Volunteers and begin their two years of service in Tonga.

The guest of honor for the ceremony, the Honorable Minister of Education, Penisimani Fifita, will accept the Volunteers on behalf of the people of Tonga. The United States Chargé d’Affaires, Michael Goldman, will administer the pledge of service to the new Volunteers and will officially present them ready to offer their service to the people of Tonga in their new Tongan communities.

The Group 83 Peace Corps Volunteers will work under the English Literacy Project, a collaborative partnership between Peace Corps and the Ministry of Education and Training. Under the project, Volunteers work alongside their Tongan counterparts in schools, communities, and ministry offices to implement programs and activities that improve levels of English literacy, increase the number of student centered activities at schools and work closely with their principals and counterparts to enhance methods of differentiated learning in the classroom and to especially reach the students who are struggling to succeed.

Ms. Gehron emphasized that the English Literacy Project for Peace Corps Tonga will continue to grow with approximately 30 new Volunteers each year. Interested schools should contact Peace Corps about applying for a Volunteer no later than April 2019.

The ceremony will recognize the volunteers’ completion of training and their commitment to serve as volunteers for two years in Tonga, as well as the strong and collaborative partnership between Peace Corps and the people and government of Tonga. The ceremony will conclude with performances of traditional Tongan dances by the new Volunteers.

For further information about Peace Corps, our program in Tonga or the swearing in ceremony, please contact Peace Corps Tonga Country Director, Nancy Gehron at ngehron@peacecorps.gov

About the Peace Corps: The Peace Corps sends the best and brightest Americans abroad on behalf of the United States to tackle the most pressing needs of people around the world. Volunteers work at the grassroots level to develop sustainable solutions that address challenges in education, health, economic development, agriculture, environment and youth development. Through their service, volunteers gain a unique cultural understanding and a life-long commitment to service that positions them to succeed in today’s global economy. Since President John F. Kennedy established the Peace Corps in 1961, nearly 220,000 Americans of all ages have served in 140 countries worldwide.
For more information, visit www.peacecorps.gov.