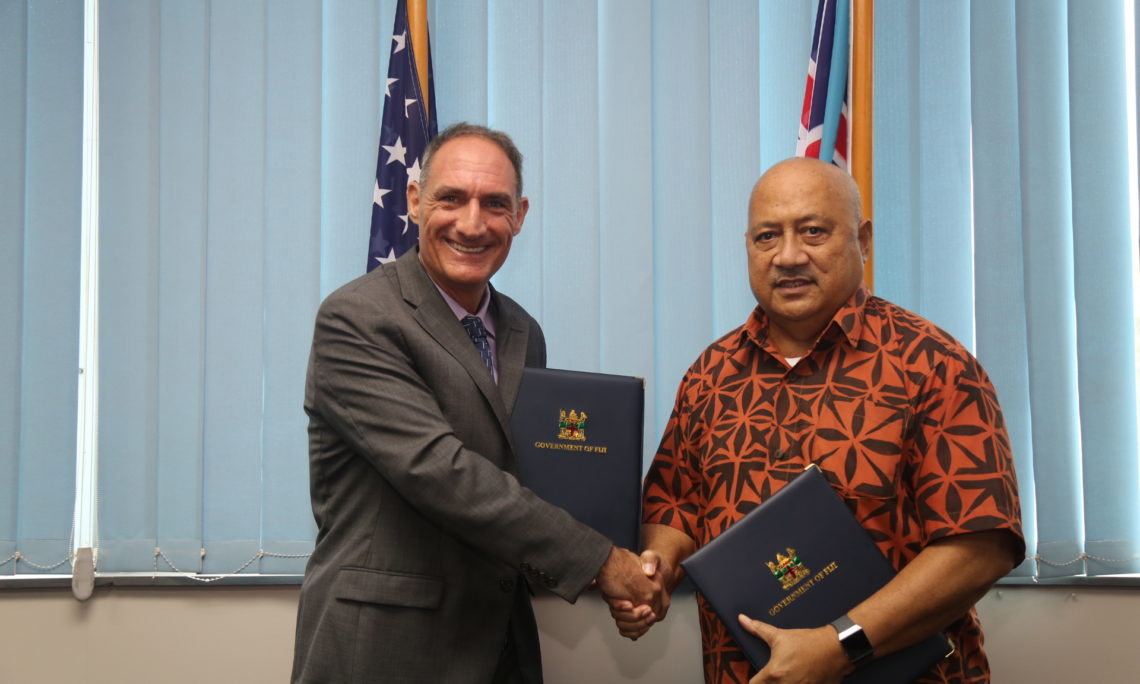 On November 12,  Michael Goldman, Charge d’Affaires of the U.S. Embassy in Suva, along with Fiji’s Minister of Defence Ratu Inoke Kubuabola signed a Shiprider agreement which allows Fijian defense and law enforcement officers to embark on U.S. Coast Guard and U.S. Navy vessels to observe, protect, board, and search vessels suspected of violating laws or regulations within their Exclusive Economic Zones or on the high seas. Below are his remarks as prepared.

“It is an honor to be here with you today to sign this historic shiprider agreement between the United States of America and the Republic of Fiji.  The United States is a committed security partner with Fiji and other Pacific Island Nations.

As a Pacific nation, the United States understands that oceanic states such as Fiji have special security needs and that the protection of maritime resources is among the most important. The United States is proud to partner with island nations on maritime security through U.S. Coast Guard and the Oceania Maritime Security Initiative (OMSI) shiprider agreements.  With today’s signing the United States now has shiprider agreements with 11 Pacific Island countries, which allow local law enforcement officers to embark on U.S. Coast Guard and U.S. Navy vessels to observe, protect, board, and search vessels suspected of violating laws or regulations within their Exclusive Economic Zones or on the high seas.

Fiji has an exclusive economic zone (EEZ) of around 1.3 million square kilometers.  It is difficult to protect Fiji’s sovereign rights for fishing and other economic activities over such a vast area of sea.  The shiprider program gives Fiji another tool to patrol and protect its sovereign waters.

Shiprider agreements like this enable increased collaborative enforcement activities by providing Navy and U.S. Coast Guard vessels and U.S. Coast Guard boarding team expertise to help host nation law enforcement personnel more effectively exercise their authority and enforce their laws and regulations where they have jurisdiction.  This agreement is meant to complement and reinforce arrangements in place with partners such as Australia, New Zealand, and France.

We and our partner nations recognize that this is a shared, regional effort. The United States supports maritime security through participation in the Pacific Islands Forum Fisheries Agency’s regional surveillance operations, high seas boardings, and inspections and other activities under the Western and Central Pacific Fisheries Commission.  In 2019, the U.S. Coast Guard will hold a five-day training course for Pacific Island shipriders aimed at combatting illegal, unreported, and unregulated (IUU) fishing.

Today’s signing is a great step forward for Fiji to better monitor its waters, increase its maritime domain awareness, protect its EEZ, increase the capacity and capability to enforce its maritime laws, and promote a free and open Indo-Pacific.

In 2017, the United States launched a whole-of-government strategy, including the departments of State, Defense, the Interior, Commerce and USAID among many others, to support a free and open Indo-Pacific in which sovereign and independent nations and diverse cultures can all prosper side-by-side and thrive in freedom and peace. The Indo-Pacific strategy focuses on three areas: economics, governance, and security. Shiprider agreements help in all three areas.

We look forward to welcoming Fiji’s first shipriders aboard a U.S. vessel at the first opportunity to build this partnership between the United States and Fiji and work together to build a free and open Indo-Pacific.”