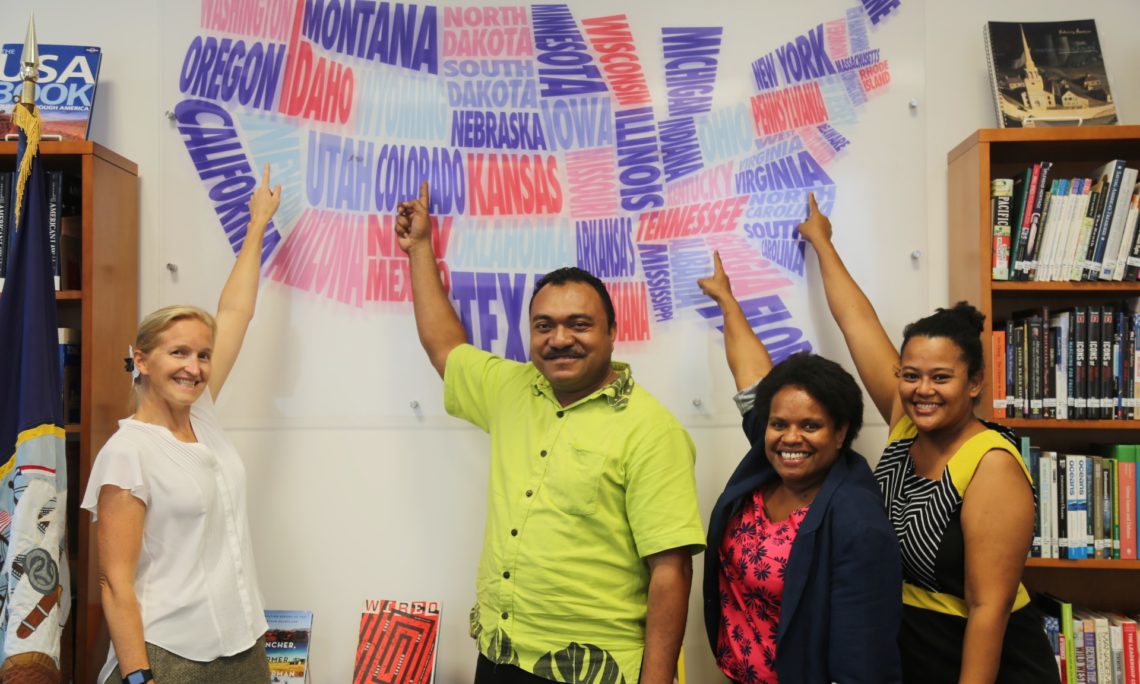 As a Chief Executive Officer at the Citizens’ Constitutional Forum (CCF), Sara Mataitawakilai has been a tireless advocate for human rights as well as democratic, electoral process, and constitutional reforms. As such, he was a natural candidate for an International Visitor Leadership Program (IVLP) on the topic of the U.S. Electoral Process.

During his three-week IVLP tour throughout the United States, Sara participated in meetings and activities to better understand the federal system of government and contemporary issues related to voting and elections while learning more about laws and initiatives focused on campaign and election oversight.

The program exposed Sara to policies the U.S. Department of State supports globally for free and fair elections. He saw the mechanics of a statewide election and observed activities immediately before, during and following Election Day in the United States.

“The program broadened my networks to 48 other countries, the U.S. campaign managers and politicians of both Democrats and Republicans from various States. The experience will definitely help me with CCF advocacy work for electoral reforms in Fiji”.

Prior to being nominated for the IVLP by the U.S. Embassy in Suva, under Sara’s guidance, CCF published several research reports on electoral process and facilitated public forums to encourage dialogue and awareness on the elections, constitutional issues, good governance, and multiculturalism. The CCF was at the forefront of Fiji’s 1997 and 2013 constitutional reforms.

Sara’s participation enabled him to learn more about the strategies used by NGOs and advocacy groups to influence and enhance public awareness of free and fair elections and improve democratic processes and governance in Fiji.

“This is one of the best program I have ever been to. The composition of the group, how our welfare was taken care of so well by organizers, and the design of the program that enabled us participants to visit places we have only heard of and meeting with high level delegates at the U.S. Government and other top officials in various cities. The learning was rich and experience was very eye opening, motivating and empowering given core of the program were centered on my work and area of interest.”

Another highlight for Sara during his time in the United States was travelling in groups from Washington, D.C. to other cities such as Indianapolis, Indiana and Denver, Colorado before reconvening in Philadelphia, Pennsylvania.

“If I have to single out the most interesting from the all-interesting activities, I would say the hands on experience of being part of the Mid Term Elections itself. Observing the Absentee Voting in Maryland, and being part of the Democrats Party Get Out the Vote Program in District 29, where I and a colleague we actually walked with State Senate District 29 Candidate J.D Ford knocking on doors of supporters to remind them to vote on election day. Another was the rare opportunity to be part of the U.S. President Donald Trump’s rally at Fort Wayne, Indiana.”

Regional Public Diplomacy Officer Rebecca Archer-Knepper said “The IVLP allows people to gain a broad and deep understanding of a topic and the United States. But more than that it allows people to make new connections with contacts and get new ideas.”

Sara said, “Throughout the exchange, we had the opportunity to network with counterparts and staffers, examine the media’s role in the U.S. political system, discuss significant domestic and foreign policy issues, and experience U.S. pluralism and regional diversity.”

After returning to Fiji, Sara reflected on the deep impact of his IVLP experience. “I came to the conclusion that the benefit of attending this program in my professional career and interest in democracy and learning from the U.S Democratic process will help me in strengthening my advocacy for friendlier electoral laws in Fiji. Secondly, it will help me in designing activities to increase voter awareness and civic education. I feel the program motivates me to run for Fijian elections in 2022 or to join a political party as part of their campaigning team. The networks established with U.S politicians and support group plus network with fellow IVLP colleagues will help in this cause”.

The IVLP is the U.S. Department of State’s premier professional exchange program. To learn more about the program, visit https://eca.state.gov/ivlp