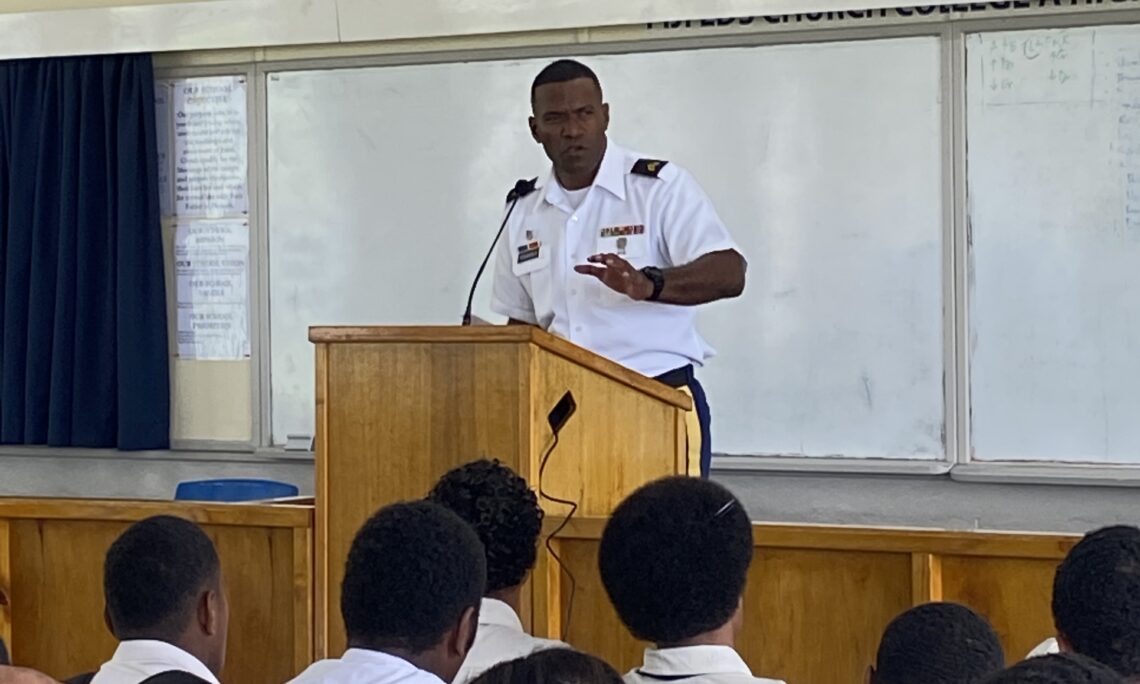 He met with students in years 12 and 13 who are preparing to move into college or trade school professions at a school career day. The theme of Sgt. Volavola’s remarks was opportunity. “Be open to opportunities and opportunities will open doors for you,” he told the youth. He spoke about how his life experiences were changed by the opportunities he took. From going on his LDS Mission to Northern California, USA to his application for a senior management position at the Polynesian Cultural Center in Hawaii, USA. “Take risks. Get out of your comfort zone. I would not be where I am today if I did not jump at the opportunities that were out of my comfort zone.” Sgt. Volavola explained to the student participants.

The mission of Task Force Oceania is to support the efforts of U.S. Embassies in Oceania and build lasting and meaningful relationships between the United States and the people of the Pacific. Task Force Oceania is an operational headquarters consisting of soldiers from all components of the U.S. Army; active-duty, Army Reserve and National Guard. These service members are Civil Affairs-trained and organized into two-person ‘Pacific Augmentation Teams’ that carry out a multitude of tasks. Their role is to assist the U.S. Embassy and serve as the local liaison between the Embassy, host- nation governments and the U.S. Army.

Colonel Blaise Zandoli the Task Force Oceania Commander said. “The U.S. and the Pacific island countries in Oceania share many fundamental values around democracy and a spiritual approach to human existence that embeds respect for the individual within a strong social context. Our shared values and mutually beneficial practical connections make partnerships a natural outcome.”