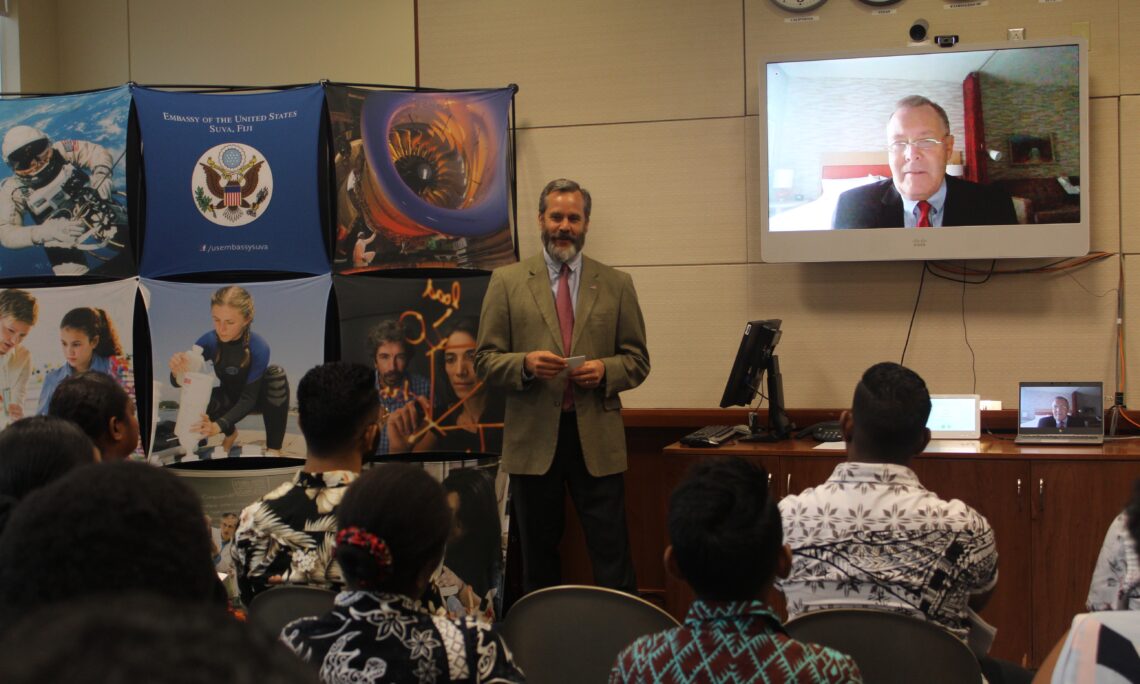 Ambassador Cella said, “Since I was a young boy, I have closely followed the United States space industry and space exploration. Jim Morhard is a good friend, and it was a joy to facilitate a meeting between him and the youth of Fiji. I very much appreciate the generosity of his time when he has little to spare. The NASA SpaceX partnership is putting the United States at the center of this next generation of space exploration. I am delighted to serve as a bridge builder to a leader in our space industry to help inspire the aspiring.”

Mr. Morhard shared his experiences as the second in command at NASA, the upcoming joint mission with SpaceX, the Crew Dragon spacecraft launch on November 15, and future plans for NASA. Mr. Morhard provides overall leadership, planning, and policy direction at NASA. He assists the Administrator in making final agency decisions, and acts in his absence to govern NASA operations. Mr. Morhard is also responsible for articulating and representing the agency’s vision.

NASA and SpaceX are beginning a regular schedule of missions with astronauts launching on U.S. rockets from U.S. soil to the International Space Station as part of NASA’s Commercial Crew Program.
NASA’s SpaceX Crew-1 is the first crew rotation mission with four astronauts flying on a commercial spacecraft, and the first including an international partner. NASA astronauts Michael Hopkins, Victor Glover, Shannon Walker, and Soichi Noguchi of the Japan Aerospace Exploration Agency (JAXA) are set to launch to the International Space Station on SpaceX’s Crew Dragon spacecraft and Falcon 9 rocket. The crew named the space capsule for this mission “Resilience”.

For the past several years, the U.S. Embassy has worked to courage youth to pursue Science, Technology, Engineering, Arts, and Math (STEAM) and prepare them to be competitive members of the 21st century workforce. For this reason, the Embassy invited youth ages 15-23 to attend the launch watch party.