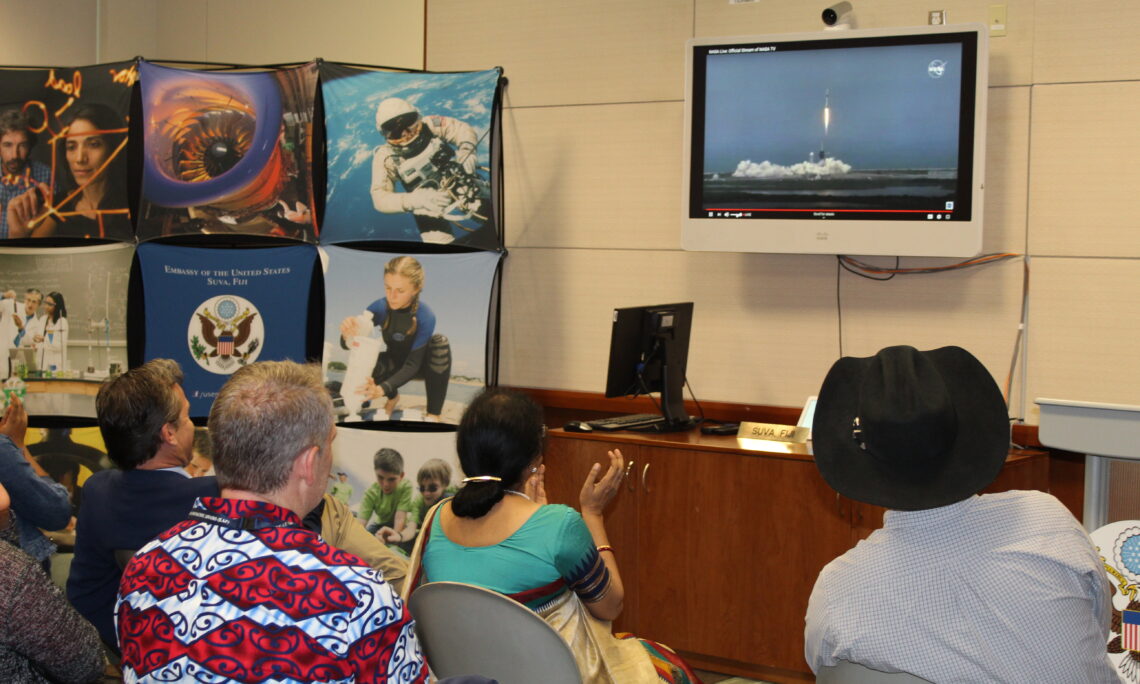 Suva – On Sunday, May 31, U.S. Ambassador Joseph Cella hosted primary, high school and university students at the U.S. Embassy to watch the historic launch of the NASA and SpaceX Demo Mission 2 to the International Space Station (ISS).  This launch (#LaunchAmerica) from Launch Complex 39A at NASA’s Kennedy Space Center in Florida is the first human space flight launched from American soil in nine years, marking the third generation of human space flight with the United States of American leading the way for peaceful space exploration for the world.  The NASA and SpaceX Demo Mission 2 will launch a Falcon 9 rocket with NASA Astronauts Bob Behnken and Doug Hurley aboard the Crew Dragon vehicle who will wear new launch and re-entry suits designed by SpaceX.

Ambassador Cella said, “Since I was a boy in grade school I have been captivated and inspired by space flight, doing model rocketry then, and do so with my children at our farm in Michigan.  I have closely followed the advancements of space flight since my boyhood, and I am honored and excited to share this historic moment of space exploration with Fiji’s youth, to excite them, and inspire them to shoot for the stars! #LaunchAmerica is an excellent opportunity to work with allies and partners in total transparency to promote innovation, research and exploration.”

Launch America exemplifies a unique collaboration, using a public private partnership model between NASA and SpaceX to create opportunities for all mankind through our astronauts.  This mission shifts away from the expensive and time-consuming process in making government-owned spacecraft, allowing private sector agility and innovation.  This venture will allow research at the International Space Station to increase by 300 percent.  It also paves the way for establishing a permanent presence on the Moon and then Mars.

The mission is currently set for between 30 to 119 days.  After undocking from the ISS, Astronauts Behnken and Hurley will angle the Crew Dragon toward Earth.  As with the Apollo space capsules, Crew Dragon will re-enter the Earth’s atmosphere, using its parachutes to slow and splash down in the Atlantic.  SpaceX’s ship “GO Navigator” will pick up the astronauts and capsule at sea and return to Florida’s Space Coast.  The launch was initially scheduled for May 28 but the launch was postponed due to weather.

For the past several years, the U.S. Embassy has worked to courage youth to pursue Science, Technology, Engineering, Arts, and Math (STEAM) and prepare them to be competitive members of the 21st century workforce.  For this reason the Embassy invited youth ages 15-23 to attend the launch watch party.  Earlier this year the Embassy announced a completion to send Pacific youth to Space Camp as part of our commitment to developing the youth and opening doors to new opportunities.  While the space and STEAM camps planned for this summer have been postponed due to travel restrictions, youth will still be able to participate in local and overseas STEAM programs sponsored by the U.S. Embassy.