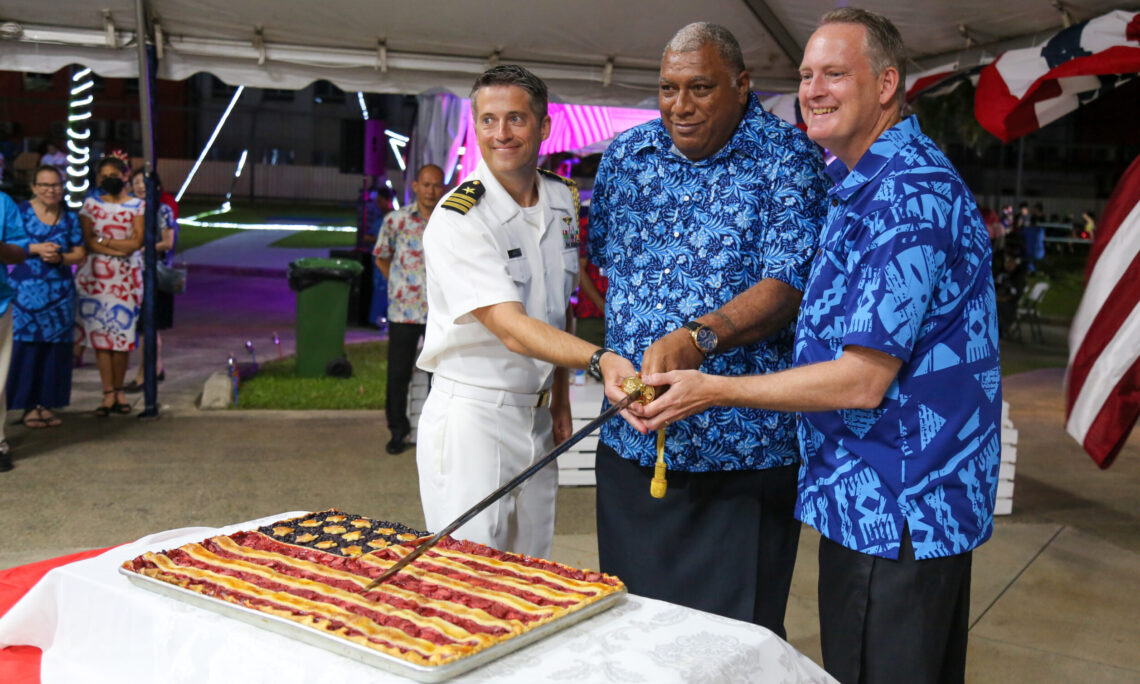 Suva, Fiji: On July 19, the U.S. Embassy in Suva celebrated Independence Day with a theme of “Friends and Neighbors.” Attendees included government, business, and community leaders, as well members of the diplomatic corps.

Chargé d’affaires (CDA) Tony Greubel reminisced, “Throughout my career in diplomacy, I have celebrated the Fourth of July all over the world. Whether the celebrations were grand national day events with a guest list of hundreds, or smaller gatherings with the U.S. Embassy community, they always shared American culture, food, and friendship, which we continue to do here tonight.”

He added, more than ever, friendship and partnership define the United States’ long-standing relationship with the big ocean states of the Blue Pacific.

“As neighbors in the Pacific region, we work together in a spirit of partnership and mutual respect to tackle common challenges, build upon shared opportunities, and deliver concrete results that improve lives for everyone in the neighborhood, and beyond.” This includes, he noted, the meaningful contributions of business sponsors to the local economy.

CDA Greubel highlighted Vice President Kamala Harris’ announcement last week of steps the United States will take to significantly deepen our engagement in the Pacific Islands. The United States will launch the process to establish two new embassies in the region: one in Tonga, one in Kiribati. We will also appoint the first-ever United States Envoy to the Pacific Islands Forum. We will return Peace Corps volunteers to the region. And USAID is taking steps to expand its footprint to include re-establishing a regional mission in Suva, Fiji.

These actions advance ongoing efforts to strengthen the U.S.-Pacific Islands partnership and to support Pacific regionalism.

“Finally, friends also share values. We are all here tonight because, two hundred and forty-six years ago, America’s founding fathers signed the Declaration of Independence. That document put forth the then novel idea — that those governed should have a say in who governs them. This is a value that we share with all true democracies, including those in the Pacific Region,” said CDA Greubel.