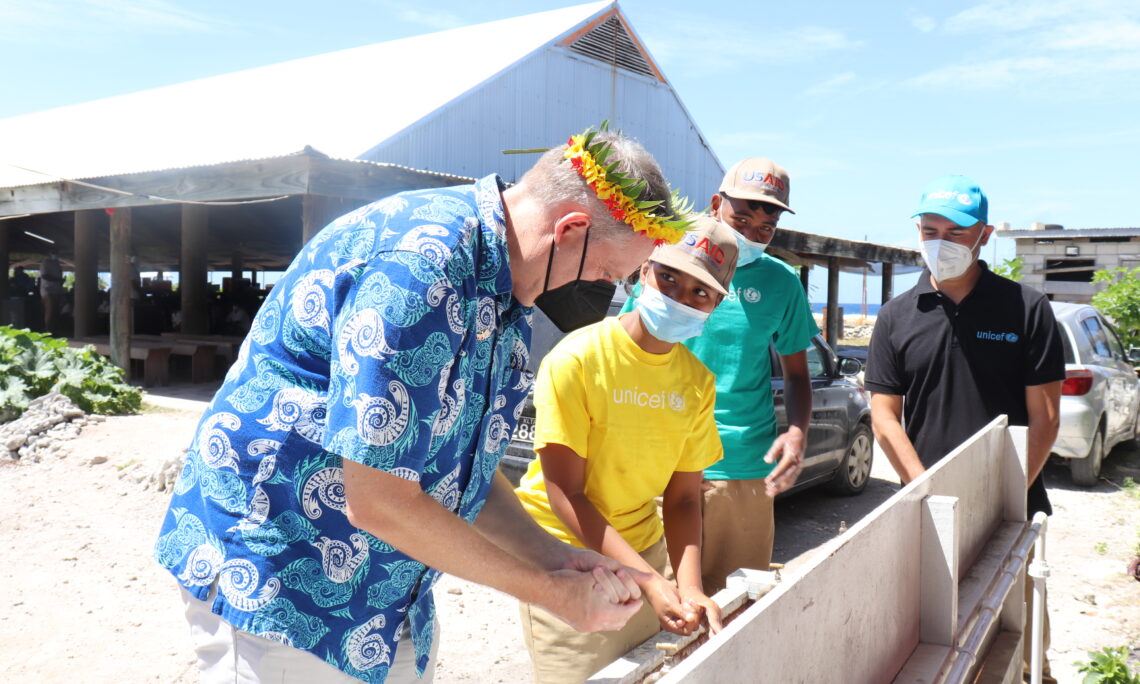 The assistance is part of the United States Agency for International Development’s (USAID) $500,000 assistance to support Kiribati in responding to the extreme drought. In partnership with the United Nations Children’s Fund (UNICEF), USAID is strengthening the capacity of the government to monitor groundwater, including the salinity levels, and provide critical water conservation and treatment messaging to affected populations.

CDA Greubel, together with representatives from the Government of Kiribati, heard from community members how the drought has impacted their lives. He visited a temporary UNICEF warehouse where he was briefed about the status of drought-related efforts, as well as an overview of WASH supplies available for mobilization for the response. To date, the drought has affected the entire population of Kiribati, including 94,000 people in the Gilbert Islands, which is heavily dependent on rainwater harvesting.

“The American people stand with the people of Kiribati during these challenging times,” said CDA Greubel. “The U.S. government, through USAID, will continue to work with national and local governments to provide immediate relief, and in the long run, help communities become more resilient to the negative effects of climate change and other extreme weather events.”

“We are grateful to USAID for the timely support to the drought response efforts, both for immediate and long-term needs” said Nick Rice Chudeau, UNICEF Pacific’s Chief of Field Office for Kiribati. “The immediate distribution of household WASH kits will help families living in the most vulnerable communities in Betio and South Tarawa safeguard their health as the ongoing drought limits their access to water for drinking, bathing, and cooking. The groundwater monitoring equipment procured by UNICEF through USAID funding will enable technical staff from the Ministry of Infrastructure and Sustainable Energy to conduct groundwater assessments and monitor the impact of the drought on Kiribati’s limited freshwater resources over time.”

The U.S. government, through USAID, works in 12 Pacific Island countries, including Kiribati, to bolster the capacity of communities to prepare for, respond to, and mitigate the adverse impacts of disasters.