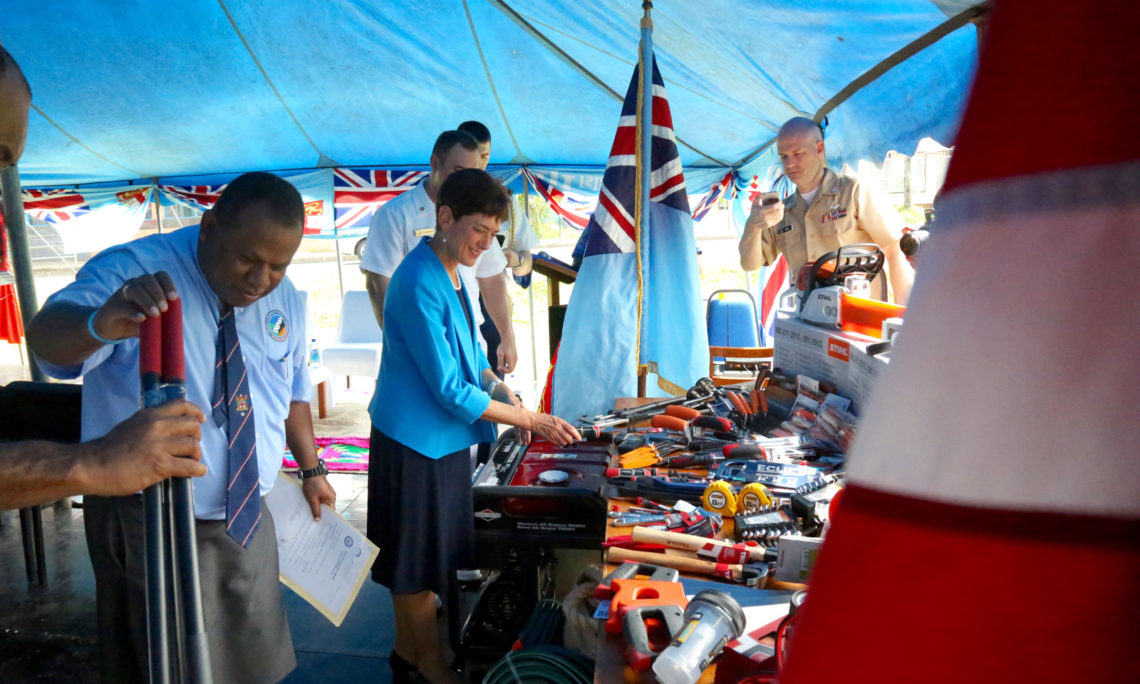 Suva, Fiji – On Wednesday, January 11 at 10:00 a.m. at the Commissioner Eastern Division Office, 1 Knolly Street, Suva, Ambassador of the United States to Fiji, Kiribati, Nauru, Tonga, and Tuvalu Judith Cefkin officially handed over humanitarian assistance tools and equipment to the government of Fiji.

In February of 2016, the Commander of the Republic of Fiji Military Forces raised with the U.S. Defense Attaché that additional power tools and building equipment could improve the response effort in the wake of severe weather events like Tropical Cyclone Winston. Through coordination with the U.S. Defense Attaché Office at U.S. Embassy Suva, Fiji and the U.S. Pacific Command, the Navy Seabees of 30th Naval Construction Regiment have been able to deliver approximately $127,000 FJD worth of humanitarian assistance tools and equipment, which will be donated to the Commissioner’s offices of each the Western, Central, Northern, and Eastern Divisions from January 11-14, 2017. In November, this same Seabees regiment also refurbished school facilities in Navolau village that had been damaged by Cyclone Winston.

By donating power tools and equipment, the U.S. government continues to support the government of Fiji’s efforts to help the survivors, especially the children, recover from the impacts of natural disasters. Toward that goal, it has completed several climate change infrastructure projects in the Pacific islands, and has provided over $6 million FJD through grants to the Red Cross, UNICEF, World Food Programme, and other UN agencies to help the Fijian people recover from Cyclone Winston. Through USAID, the U.S. government builds the resilience of vulnerable coastal communities in the Pacific Island region to the impacts of climate change. This includes rehabilitating and constructing new, small-scale community infrastructure and building capacity for community engagement for disaster prevention and preparedness.