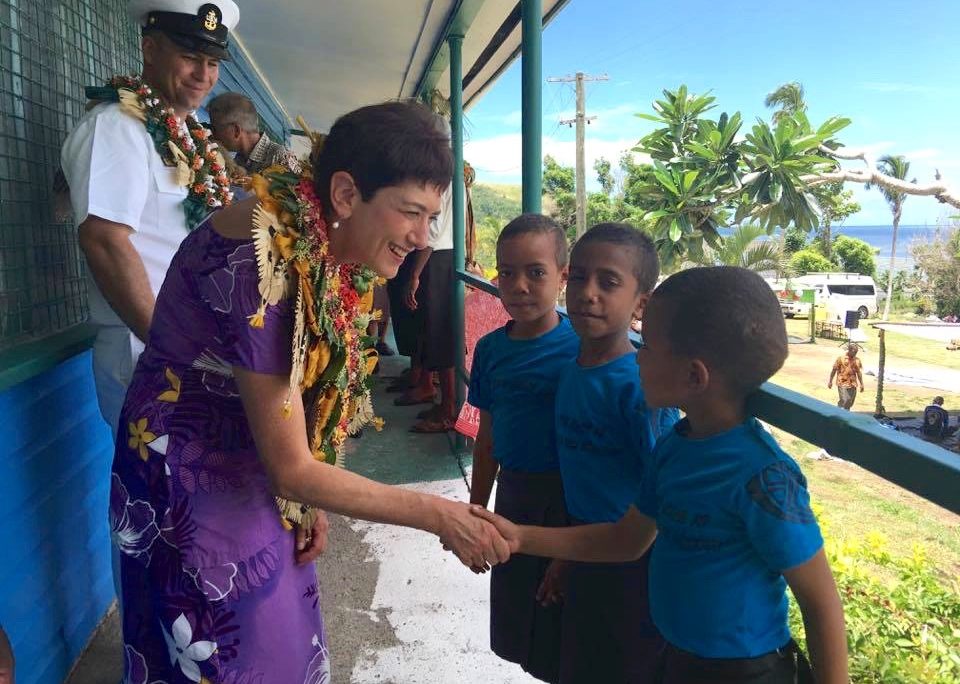 The U.S. government, through the United States Agency for International Development (USAID), in coordination with the Government of Fiji, provided USD 50,000 for materials to help repair the school’s damaged infrastructure, while the U.S. Navy Seabees deployed a team of eleven construction men and women to conduct repairs at the school over a two month period, completing their work on November 28, 2016.

This project will allow the children to move back into their damaged school. At present there are 172 students at the Navolau School, ranging from Kindergarten to Year 8. The school will also serve as an emergency shelter for the entire village.

“The U.S. government is pleased to have worked closely with the Government of Fiji on this reconstruction project to improve the lives of local communities living on the frontlines of climate change. We remain a committed partner in creating a more climate-resilient future, and improving the quality of life for all,” said Ambassador Cefkin.

In April, Ambassador Cefkin, together with USAID Regional Coordinator Richard Edwards, and UNICEF Country Representative Karen Allen, visited Ra Province and expressed support to the Government of Fiji’s efforts to help the survivors, especially the children, recover from the impacts of Tropical Cyclone Winston.

The U.S. government has completed several climate change infrastructure projects in the Pacific Islands, and has provided over USD 3 million through grants to the Red Cross, UNICEF, World Food Programme, and other UN agencies to help the Fijian people recover from this tragic cyclone. Through USAID, the U.S. government builds the resilience of vulnerable coastal communities in the Pacific Island region to the impacts of climate change. This includes rehabilitating and constructing new, small-scale community infrastructure and building capacity for community engagement for disaster prevention and preparedness.

The Ambassador and U.S. Embassy officials visited the school to celebrate the successful completion of this project on November 29.

For more information:
Contact USAID Pacific Islands Office at +679 331-4466 or email: infopacificislands@usaid.gov Or you can visit our website at http://www.usaid.gov/pacific-islands