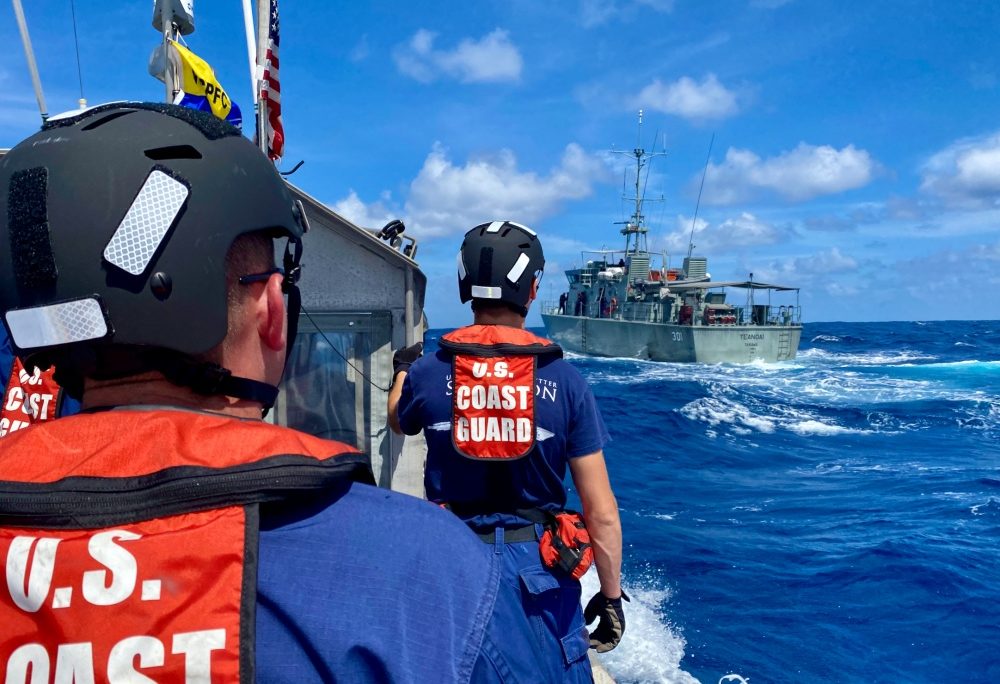 The crews of the USCGC Stratton (WMSL 752) and the RKS Teanoai (301) conducted a passenger and training exchange in the Pacific Ocean, Nov. 7.

“The U.S. and its allies are trusted partners in the region, and we were pleased to work with them building familiarity and experience,” said Capt. Bob Little, commanding officer of Stratton. “The U.S. Coast Guard employs 11 bilateral shiprider agreements with Pacific Island Forum nations to help them ensure their resource security and maritime sovereignty.”

The two ship’s crews rendezvoused at sea. The Stratton conducted maneuvers with the Teanoai crew, to include the launch and maneuvering of a Stratton small-boat alongside the 103-foot Teanoai in 5 to 6-foot seas with 4 foot swells. Stratton’s embarked MH-65 Dolphin helicopter crew was launched from the cutter and conducted an overflight of the vessels to demonstrated hoist operations.

Through relationships and patrols, the U.S. Coast Guard combats illegal fishing and other maritime threats across the Pacific. By providing this support to Pacific Island Forum nations, such as Kiribati, resource security, and maritime sovereignty, are protected. Combating illegal activity is part of promoting maritime governance and a rules-based international order essential to a free and open Indo-Pacific.

Tuna is a $7 billion annual industry. ~70 percent of tuna is from the Western and Central Pacific. Estimates place the value of Illegal, Unregulated, and Underreported (IUU) fishing as high as $616 million annually.

The Teanoai is a patrol boat from the nation of Kiribati with 14 to 18 crew. It is one 22 pacific-class patrol boats built by Australia and donated to 12 South Pacific countries. The 150 members of the 418-foot Stratton have been on deployment under the operational control of the Navy’s Seventh Fleet in the Indo-Pacific region since June conducting joint missions. Their patrol will continue through mid-November as they head east to their homeport of Alameda, California.

Kiribati is a sovereign state in the central Pacific Ocean. The permanent population is just over 110,000, more than half of whom live on Tarawa Atoll. The country comprises 32 atolls and one raised coral island dispersed over 1.3 million square miles straddles both the equator and the 180th meridian.

Founded as the South Pacific Forum in 1971, the Pacific Islands Forum (PIF) is an inter-governmental organization that aims to enhance cooperation between countries and territories of the Pacific Ocean. It is a United Nations General Assembly observer.

The U.S. Coast Guard has an enduring role in the Indo-Pacific, dating back over 150 years, and the ongoing deployment of resources to the region directly supports U.S. foreign policy and national security objectives. They participate jointly with Kiribati in annual operations such as the recent Operation Kurukuru, under the Forum Fisheries Agency.