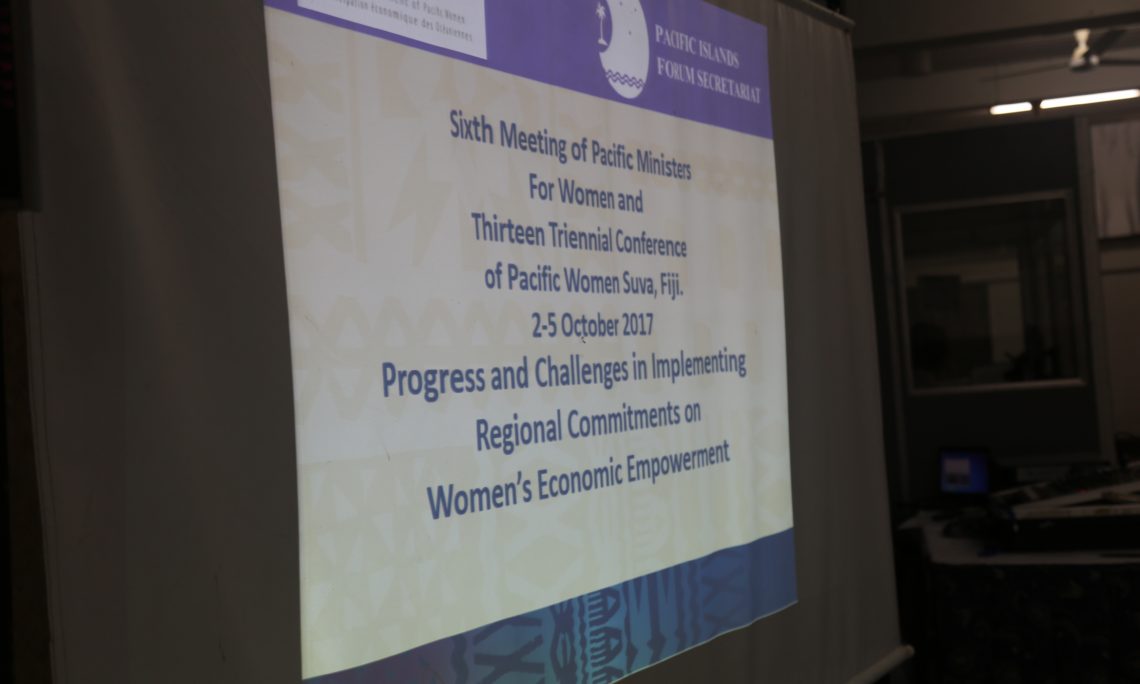 U.S. Embassy Suva Deputy Chief of Mission Michael Goldman represented the United States at the 6th Meeting of Pacific Ministers for Women, where he highlighted U.S. support for gender equality in the Pacific and recognized the Pacific Community (SPC) for its ongoing gender work in the region.  The United States applauds the commitment that the Pacific Islands have made to advance gender equality and support women’s economic empowerment.  No country can flourish if it fails to capitalize on the talents of half of its people.  Countries are more stable, prosperous, and secure when women and girls are afforded equal opportunity to fully and freely participate in all spheres of society.

During his remarks, Deputy Chief of Mission Goldman said, “The United States remains committed to advancing the status of women and girls around the world.  In the Pacific, the United States invests in efforts to build women’s agency and leadership, empower women economically, and reduce gender-based violence.”

As a proud member of the SPC, the United States supports the focus of the 13th Triennial Conference of Pacific Women and 6th Meeting of Pacific Ministers for Women on efforts to promote women’s economic empowerment, including by increasing resources for entrepreneurship.  The United States works in the Pacific and around the world to support women entrepreneurs.  Through our partnerships with governments and civil society organizations around the world, the United States works to empower women and girls as leaders, peace-builders, and formal wage-earners in the communities and societies in which they live.  Some of U.S. programs in the Pacific include:

Leadership Development in the North Pacific:  The U.S. Department of State has created a new program to promote gender equality in decision making in the North Pacific.  This program, in partnership with the East-West Center, seeks to increase the personal, civic, and professional agency of women in seven locations within the Federated States of Micronesia, Republic of the Marshall Islands, and Republic of Palau.  The program will guide 21 women through a six-month, practice-based leadership learning curriculum.  Once trained, these women will lead locally-based peer learning labs to build women’s leadership on critical community and workplace issues.

Connecting Women Entrepreneurs:  The United States will support up to five women entrepreneurs from Fiji, Papua New Guinea, and Solomon Islands to attend the 2017 Global Entrepreneurship Summit (GES) November 28-30 in Hyderabad, India.  This year’s GES intends to inspire innovative initiatives, forge new collaborations across countries, and increase economic opportunities, particularly amongst women, in support of the theme Women First, Prosperity for All.

Support for Sustainable Seafood Entrepreneurs:  The Fish 2.0 competition helps Pacific sustainable seafood businesses, including those owned by women, to grow their businesses through capacity building, mentoring, and exposure to investor networks.  The 2017 Fish 2.0 competition showed strong interest from women entrepreneurs, with fourteen women applying to attend the capacity building workshop held in Fiji last fall.  The top female competitor (from Tonga) will attend the Fish 2.0 Innovation Forum in November in Palo Alto, CA, where she will network with industry experts and investors.  The U.S. Department of State co-sponsored the 2017 Pacific Islands track of Fish 2.0 along with Pacific Islands Trade and Invest Sydney, Forum Fisheries Agency, and Pacific Islands Forum Secretariat.

Building a Culture of Entrepreneurship in Papua New Guinea:  In Papua New Guinea, the U.S. Department of State has supported a number of efforts to tackle gender-based violence and support women’s economic empowerment.  Last year, we partnered with the Government of Australia to launch the Women’s Business Resource Center (WBRC) in Port Moresby.  This unique center builds the confidence of women entrepreneurs by providing a safe space for them to build their businesses, receive mentoring and training on topics such as financial literacy, and network with other entrepreneurs and business professionals.  At least a dozen women are now running offices out of the Center, while others are growing their businesses through the opportunities provided by the Center.  The WBRC is one part of a four-part program to create an entrepreneurial ecosystem in PNG that includes building entrepreneurial curricula into universities, a business plan competition for women, and technical assistance for women’s business groups to become more effective advocates for women entrepreneurs and professionals.

Sustainable Livelihoods for Women:  USAID’s Pacific American Climate Fund (PACAM) is a program that is financing community development activities across twelve Pacific Island countries – with an emphasis on empowering women.  In six of these countries (Federated States of Micronesia, Fiji, Republic of the Marshall Islands, Palau, Solomon Islands, and Vanuatu), USAID is working with women’s groups to build new skills that improve food security and increase incomes.  In Palau, a PACAM grant to Palau Conservation Society is teaching women to revive neglected taro patches and sustain them using traditional soil conservation and watershed management practices, providing jobs and food security.  In the Solomon Islands, a PACAM grant to the Natural Resources Development Foundation supports women to pursue sustainable sources of income, including beekeeping, and manage their money through savings clubs.