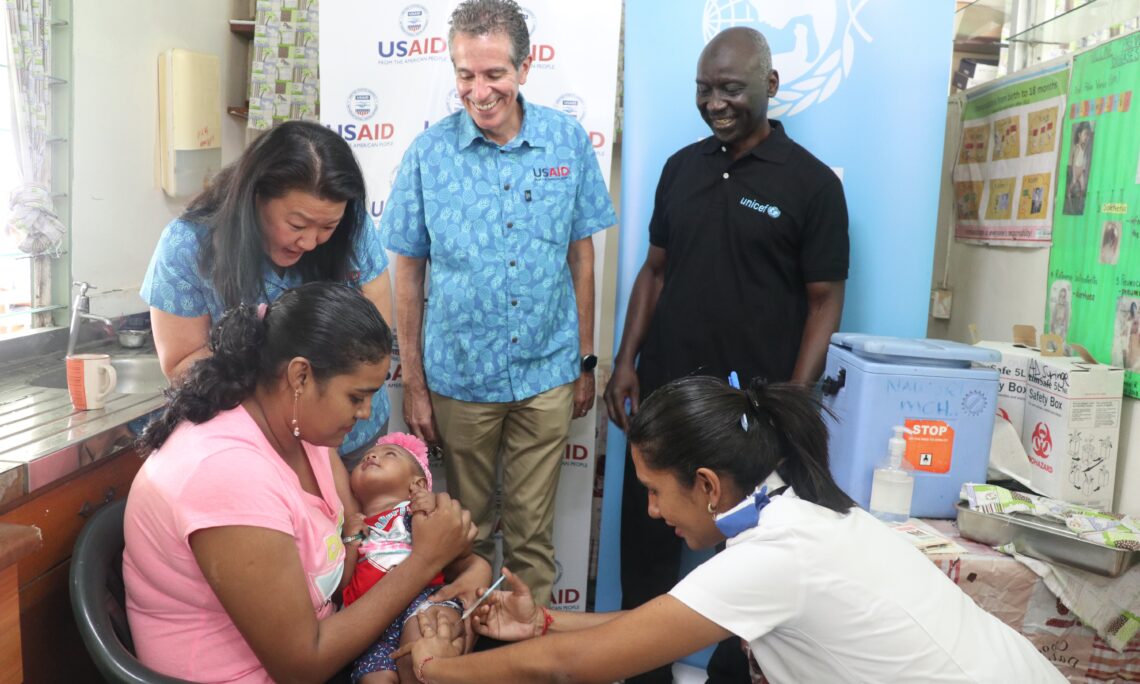 “As President Biden announced during the U.S.- Pacific Island Country Summit in September, USAID is a committed partner with the Pacific Island countries,” said Mission Director Washburn. “By re-establishing a regional mission for the Pacific as part of the broader U.S Embassy in Suva, USAID aims to bolster the Pacific Islanders’ own economic and social development priorities, including in the 2050 Strategy for the Blue Pacific Continent.”

During their first official trip to Fiji, Mission Director Washburn and Deputy Mission Director Chung spoke with Fiji Permanent Secretary Yogesh Karan about USAID’s expanding partnership with Fiji and the Pacific, and how USAID’s work has supported mutual development priorities.

USAID also met with representatives from the Pacific Islands Forum (PIF) and High Commissioners and Counselors from Tuvalu, Nauru, and Samoa to discuss how the United States, through USAID, is supporting Pacific island countries’ development goals, as outlined in the 2050 Strategy for the Blue Pacific Continent, and USAID’s recently released Pacific Islands Strategic Framework. In addition, USAID strengthened coordination to support Pacific Island nations’ development priorities with representatives from Australia, New Zealand, the United Kingdom, Korea, Japan, and the Secretariat of the Pacific Community.

USAID leadership spoke with representatives from the government and civil society organizations about their efforts, challenges, and opportunities to combat human trafficking. Through the Pacific Regional Initiative and Support for More Effective Counter Trafficking in Persons (Pacific RISE-CTIP) project, the United States, through a USAID partnership with the Asia Foundation, aims to strengthen prevention, protection, and prosecution of human trafficking in Fiji, the Republic of the Marshall Islands, Papua New Guinea, and Tonga through a multi-sectoral approach that engages the government, civil society, and private sector.

This USAID leadership trip underscores the importance of Fiji as a future USAID regional mission and local partnerships to build a more prosperous, resilient society for all Pacific Islanders.